I want to present a model for thinking about relationships and polyamory. Like any model, I will relate it (hopefully strongly) to real world things, but the model exists within its own system (see this wikipedia article on models).

A Relationship has a few interesting properties:

A Community has just a couple of interesting properties:

An Expectation is a sort-of contract that binds everyone and everything inside of a Relationship or inside of a Community. Just like contracts in the real world, Expectations can be: 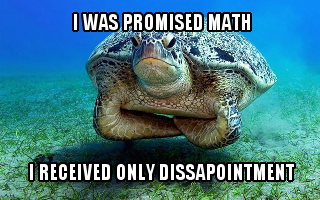 Let me show you how I use it to think about relationships and why it helps me.

I'm going to apply the model to monogamy first because monogamy is a very simple case.

When someone in the Relationship breaks that Expectation, bad things happen, heavy discussions are had, and popular songs are written. 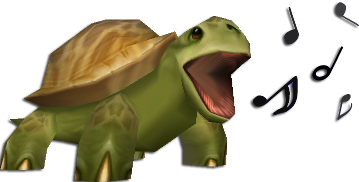 A theme of this post is that meeting, defining, and updating the various Expectations that bind each person is important. When an Expectation is broken, strife happens. So it's important to make sure that Expectations are well-understood and well-communicated.

Let's look at a monogamous-like relationship between three people, so we can see how Communities are involved without getting too complicated.

Let's say we have three people. Each person has a Relationship with each other person (so that's 3 Relationships in total). Each Relationship may have slightly or vastly different Expectations (ex: Relationship 1 has an Expectation where roughly 2 days a week of each person's time is spent together in 1-on-1 interaction, where Relationship 2 has a similar expectation but only a couple days a month because they live so far apart). Here's a graph where the three people are named after single letters, how convenient!

All three Relationships, and all the three people, are in a Community together. And that Community has the Expectation that no one will "interact too intimately" with anyone outside of the Community (again the meaning of too much intimacy varies). 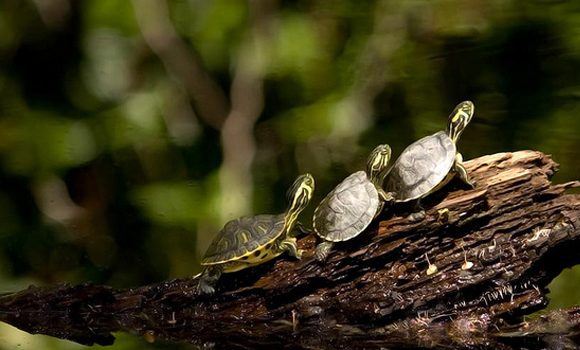 Just like for each Relationship: meeting, defining, and updating this Community's Expectations is very important. It's not enough for just a couple people in the Community to decide that an Expectation can be broken or changed. Everyone has to agree, otherwise strife happens.

In this example where there's a strong relationship between everyone involved, handling Community Expectations may not be more difficult than handling Relationship Expectations. But...

An open polyamorous relationship can get super tricky, quickly. Specifically, managing Community expectations can be very challenging because not everyone in the Community necessarily has strong communication channels between each other. Let's see a turtle related image that relates to this for a moment:

To highlight the difficulty of the situation, let's say B and all their partners (A, C, and D) have agreed to always get STI screens done every 3 months. Within our model, we might say that A, B, C, and D are all in a Community which has that Expectation.

We're already in potentially ill-defined territory here, because it's not immediately clear (from what I've written) whether everyone expects D's partners to also get screened.

But maybe everything is fine, life is proceeding, and everyone's generally happy. And then at some point A wants everyone to use latex gloves whenever genital touching occurs during sex. A now has the task of convincing the entire Community to agree to this, and they may have to communicate almost exclusively through B. So now everyone is playing telephone while trying to establish a contract-like Expectation that binds them all.

A may worry that C or D could feel put-off by the idea of A pushing this change. Strife could occur because A feels like they can't affect the Community in ways that are important to them.

I like thinking about my real-world relationships within this model because while relationships are very complicated and have lots of complicated pieces that go well-beyond just a set of Expectations and a pair of people, Relationships and Communities are simple and well-defined and I can understand the idea of explicit, contract-like Expectations existing and affecting everyone.

Indeed it helps me understand a piece of why so many people choose hierarchical polyamory: if one or two people have the power to add Expectations to a Community without needing to get explicit approval from others in that Community, less difficult games of telephone have to happen.

But of course, I don't actually have any answers to the problems of "how do I make these things less difficult", or "why did you write this give me my time back". I'd be interested in hearing your thoughts though. Say hello to me on twitter if you'd like to share.